While lack of knowledge about epilepsy is a prevalent issue in all EU countries, major differences between EU Member States are also observed in access to medical and medico-social care of persons with epilepsy.

The main actions developed at the EU level have been directed towards research and acknowledgment of the importance and specificities of epilepsy. 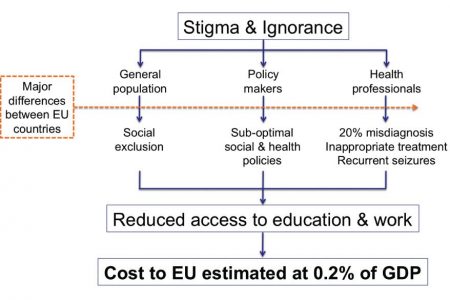 Regarding research, several major programs have been funded by the EU, including the seminal EPICURE project within FP6 (about €12 million), and up to €50 million within various Funding Program FP7 calls. These programs were primarily aimed at promoting breakthrough and innovative research, with the view to enable major advances in the field for academia and industry.

While this strategy proved successful in stimulating basic research, it raises some concerns that deserve attention for the future:

Regarding acknowledgment of the importance and specificities of epilepsy in Europe, a momentum was achieved when the European Parliament approved, by an over whelming majority, the EU Written Declaration on Epilepsy 22/2011 in September 2011. Besides its direct impact on the FP7 and other health-related EU programs, this declaration intends to promote actions in favor of epilepsy by each member state.

Our Strategic Plan is to promote, prevention, treatment and research of epilepsy within Horizon 2020. Such a plan can only be executed by facilitating and promoting tactical cooperation among WHO/EU Member states, and through partnerships with key stakeholders. Most importantly, Horizon 2020 should allow the implementation of actions with a tangible and measurable impact upon the medical and social situation of European citizens with epilepsy.

Stigma, ignorance, and disparities in knowledge and quality of care across EU countries represent the foundations of the plan, since these issues are considered of primary importance to both the commissioners and MEPs. It also appears instrumental to stress the potential for short-term financial reward to the EU, as delineated in the figure below. This requires setting up projects that could monitor impact on health and health-economy indicators. 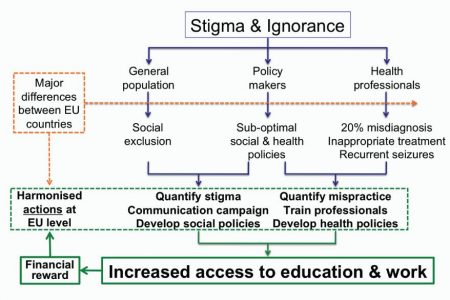 Within that framework, specific objectives need to be delineated: