Towards a Global Alliance on Epilepsy Research

International Epilepsy Day event in the European Parliament reports on the unmet needs in the field of epilepsy and the status of epilepsy research priorities at a global level.

The event was organised by Epilepsy Alliance Europe joint task force of IBE and ILAE in Europe and hosted by the European Advocates for Epilepsy MEP group in the parliament.

Two years ago, in February 2017, Epilepsy Alliance Europe organised a very significant meeting in the European Parliament in Brussels to highlight the need for a global effort if appropriate advances were to be made in addressing the unmet needs of epilepsy, both in Europe and around the world.

The meeting heard that, although very little progress had been made in improving medical outcomes of people with epilepsy during the last decades, a large amount of data derived from extensive pre-clinical research has become available which provided a strong rationale for the conduction of potentially ground-breaking academically-driven clinical studies tackling several priority issues that were acknowledged by the epilepsy community: 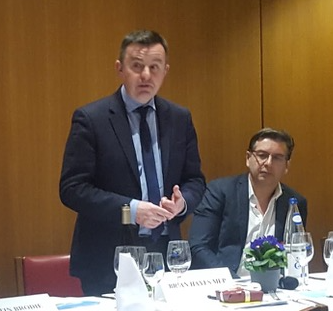 All of these objectives would require recruitment and financial capacities that could only be achieved at the global level, and justify the building of a global alliance program for epilepsy research.

Two other significant events took place in 2018. The first of these was the epiXchange workshop, with seven large EU-funded projects joining forces to organise the one-day event on 23 May, in Brussels. The event was designed to gather a critical mass of epilepsy researchers in order to showcase the latest progress in research aimed to improve the way epilepsy is diagnosed and treated. The projects had been funded mainly through the 7th Framework Programme (FP7).

Participants heard how, despite intensive and ongoing research, epilepsy research still faces several unmet needs, with major gaps in understanding the disease with large economic and societal costs. The event provided the opportunity to synergise the results of the seven diverse projects and to identify the several bottle necks which still remain.

The meeting showed how a bottom up approach is needed to coordinate research and policies with more collaborative research, including public partnerships, public private partnerships, and global co-operation.

On the following day, the EU Research Commission held a workshop titled ‘Shaping the Future of Epilepsy Research’ with a global panel of speakers from Europe, Asia, Africa, and North and South America, at which it was reported that the upcoming EU Horizon Europe framework for research would be calling for bold inspirational approaches with wide societal relevance, including open science, global challenges and open innovation pillars. Also looking to develop a global perspective, a call under the H2020 project titled ‘Coordinating European brain research and developing global initiatives’ was underway with the European Brain Council’s European Brain Research Area (EBRA) proposal being selected to coordinate the project.

So, it was with this, not-insignificant, background of activities, raising the call for the global perspectives that are now required in research, that a lunch meeting took place in the parliament in Strasbourg on Tuesday 12 February 2019, the day after International Epilepsy Day.

Invitations to the meeting were extended to the 67 MEPs who form the membership of the European Advocates for Epilepsy group and the event was hosted, once again, by Brian Hayes MEP. At the lunch, 12 MEPs, from Czech Republic, France, Germany, Ireland, Finland, Luxembourg, Romania and Slovenia, voiced their support for the 6 million people living with epilepsy in Europe. In turn, the MEPs heard from speakers about the continued unmet needs of people living with epilepsy and the need for improved services, novel new treatments and actions designed to educate the public about epilepsy and, thereby, reduce discrimination. 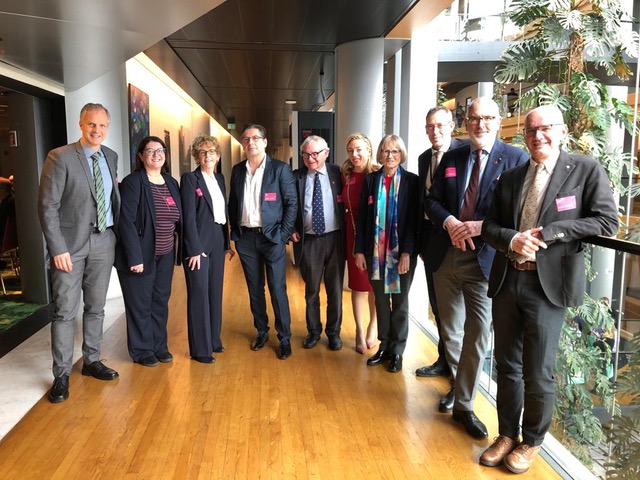 In welcoming all those present, Brian Hayes highlighted the success of the MEP group since its launch in 2011. He advised that he would be retiring from politics at the end of the current EU parliamentary term but would be happy to assist in identifying an MEP to assume the chair once the elections were completed in May. Of note, the average turnover of MEPs at the time of elections is 50%. This means that about half of the membership of the MEP group would be lost, requiring fresh efforts to rebuild it post-election.

Speaking in Strasbourg, Prof Philippe Ryvlin, co-chair of Epilepsy Alliance Europe, thanked Brian Hayes and the MEP group for the support they had provided over the previous seven years. Notable achievements included the Written Declaration on Epilepsy 22/2011, that had been signed by 459 MEPs and had resulted in major funding for epilepsy research in the Framework Programme 7 (FP7). Many of the projects funded by FP7 now formed the epiXchange network. Other epilepsy projects that had received EU funding since 2011 included E-PILEPSY, the pilot European Reference Network (ERN) project; EpiCARE, an ERN focused on rare and complex epilepsies; and ESBACE, a project funded by DG Sante that surveyed epilepsy prevalence and cost burden in a number of countries. Prof Ryvlin highlighted the need for a global focus on epilepsy research if progress is to be made in identifying new and novel treatments for the 30 – 35% of people with epilepsy whose seizures currently are not controlled by existing treatments. There were new opportunities for such global research initiatives through the European Brain Research Area (EBRA).

An issue for concern was the lack of support in Europe for the WHA Resolution on Epilepsy, approved by the World Health Assembly in 2015, with report back in 2018. Few countries had addressed the recommendations of the resolution and efforts were now underway for a call to action. While support had been received from some countries including Russia, China and Brazil, there had been no support from EU Member States, despite their support for the EU Written Declaration in 2011. The argument was that epilepsy was too narrow a topic. However, the counter arguments were that epilepsy encompassed several hundred diseases; was sufficiently wide to have been selected for an EU-funded European Reference Network (ERN); 50 million people worldwide had been diagnosed with epilepsy; and it ranked second in the league of years of life lost.

In her presentation, Francesca Sofia, an Italian mother of a young child with epilepsy, said that her biggest wish was for her daughter simply to be happy, adding that this was a wish shared by all parents for their children. Francesca’s daughter Bea has a complex form of epilepsy which is resistant to medication. She continues to have seizures and requires a lot of support.

“I wish my daughter simply to be happy”

Despite the hardships that life has thrown at her, Bea remains a happy loving 9-year old, who goes to school and who yearns to have friends. But the sad situation is that she has never had a friend and has never been invited to a play-date or party by classmates. Any invitation sent by Francesca to her daughters classmates for play dates or parties have always been declined by their parents. A strong indication that there is still huge misconception and stigma attached to a diagnosis of epilepsy. And if the parents are discriminatory towards Bea, this is likely to run off onto their young children.

Sofia’s story of her daughter’s struggles shows clearly the continued need for basic education about epilepsy in the community and undermines the reality that many people with epilepsy face – that epilepsy is more than seizures.

Fred Destrebecq, Executive Director of the European Brain Council (EBC) outlined the purpose and expectations of EBRA, a consortium of the Network of European funding for Neuroscience research (NEURON), the Joint Programme Neuro-degenerative Disease Research (JPND) and the Human Brain Project (HBP). The EU was seeking projects that would address the problems of duplication and fragmentation of research efforts and that would encourage more collaboration and better coordination of brain research at EU and global levels. This would lead to improved access to research systems and data sources by all stakeholders involved in the neuroscience research area, resulting in better use of the investments that are made in brain research. The critical mass and economies of scale thus achieved would facilitate the development of new global initiatives and quicker translation of successful outcomes to clinical applications.

Huge investment has been provided by the EU for brain research to a number of initiatives. Although the initiatives generated a considerable amount of knowledge and innovative approaches, more coordinated efforts are needed to avoid fragmentation, to identify gaps and highlight priorities, in order to support and foster translation into new health interventions.

The EBRA Consortium will foster alignment and co-ordination of research strategies across European and global brain initia- tives; facilitate the emergence of research projects in specific areas in active clusters selected for involvement in EBRA, and provide them with support for effective collaboration, including enabling sharing of data and access to research infrastructures; and increase the visibility of the brain research portfolio as a whole and promote the uptake of EBRA results to key stake-holders. 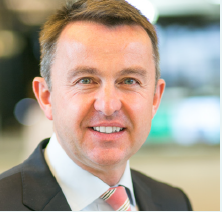 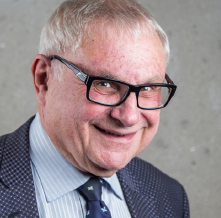 Prof Martin Brodie is President of the International Bureau for Epilepsy (IBE) and Co-chair Epilepsy Alliance Europe. His involvement with IBE goes back more than 30 years, having served as a member of its board from 2005 to 2009.
His research interests include antiepileptic drug neuropharmacology, randomised clinical trials, prognostic outcome studies, management of epilepsy and factors affecting antiepileptic drug response. 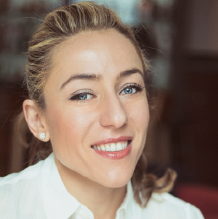 Dr Sofia is a molecular biologist with a PhD in neuroscience. She specialized in healthcare economics and policy as a research program manager for an Italian health foundation, dedicated to rare genetic diseases.
Her career path changed when her youngest daughter was diagnosed with a rare form of epilepsy, in 2011. In July 2014, she joined the Italian Epilepsy Federation with the aim of fostering epilepsy research. Recently, she founded Science Compass, an enterprise that provides services and tools for effective investments in the biomedical sector to non-profit organizations. 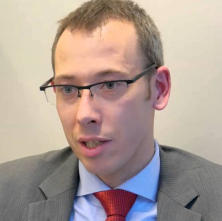 Frédéric Destrebecq is Executive Director of the European Brain Council. In this capacity, he is responsible for providing strategic direction and leadership while managing the day-to-day operations of EBC and its ongoing relationships with its member associations and other stakeholders, as well as representing the organisation in various European and national forums.
Prior to this position, Fred served the European Union of Medical Specialists (UEMS) as Chief Executive Officer, and previously as Director for European Affairs. 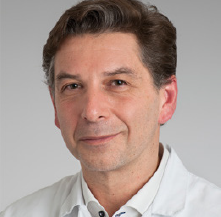 Dr Ryvlin is Professor of Neurology and Chair of the Department of Clinical Neurosciences at University Hospital of Lausanne (CHUV), Switzerland, and Director of the Epilepsy Institute (IDEE) in Lyon, France. He is President of the European Epilepsy Monitoring Association (EEMA), co-Chair of the Epilepsy Alliance Europe Task Force, founder of the European Network for Epilepsy Research (ENER), and coordinator of the EU funded pilot ERN – (E-PILEPSY).